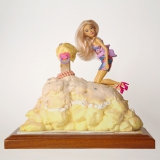 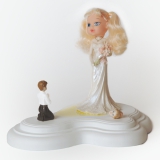 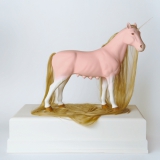 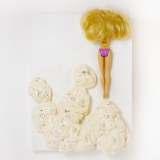 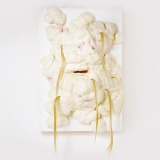 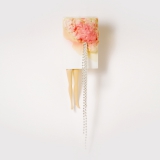 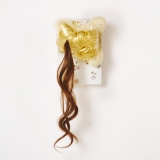 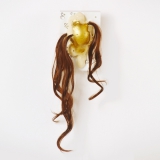 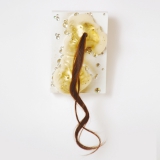 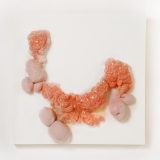 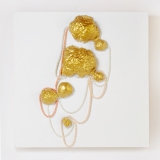 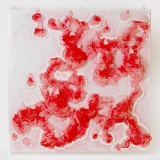 Bevan Ramsay’s exhibition is a bit out of the Norfolk Library’s usual line. For the most part, the works shown at the library are representational in ways people are quite comfortable with and have little trouble looking at or talking about. Less often, the library has shown abstract work, and while people may feel less sure about their judgments and have a more difficult time saying what they think the work may be about, it too is a kind of work with which most are familiar and at least somewhat comfortable. Unbridled isn’t either of these things. If you think modernism is sort of purist impulse in art —the familiar story, for example, of painting as it runs from Manet or Cezanne through Cubism and Mondrian to Pollock and his compatriots--finding its natural fulfillment in abstraction, you may want to call this work “postmodern.” If we think modernism is more nearly an argument about what constitutes an adequate response to modernity, then you can see Ramsay’s work as belonging to the side of the argument that passes through Dada and Surrealism into, among other things, the Pop Art of the 1960s. But Ramsay’s appropriations of Barbie are clearly not just further versions of Warhol’s Soup Cans, and the widespread idea that “postmodernism” simply means that the artist gets to do whatever he or she wants doesn’t get us very far with the particular items that make up Unbridled. The goal of these remarks is simply to offer one way into the work rather than bouncing off of it and so perhaps to open up some further conversation this afternoon.

The way in involves making up a story—I don’t know Bevan particularly well and have, I think, until yesterday only ever talked to him about coffee—about how these things came to be the way they are.

I know that it begins with Bevan’s attention being caught by his daughter Charlotte’s Barbie doll, struck by its exaggerated figure, glossy hair, and so on—its “sexiness” and lack of relation to any actual female body (let alone a three-year-old’s). He is hardly alone in noticing this—pretty much everyone is struck by it, it’s been the object of repeated feminist criticism, and there are certainly well-established minor academic and artistic industries devoted to it—so this reaction by itself doesn’t go very far and has no obvious artistic promise or outcome. Still, I imagine him sufficiently intrigued to have started a small collection of Barbies and others from among Charlotte’s favorite things in his studio as something to think about.

And there, as the objects spread across the table, I imagine him noticing that things look different piled up this way: the individual Barbie now counts less than her repetition, and other repetitions suddenly become more visible—Barbie’s hair recurring in My Little Pony’s overflowing mane and tail, and so on. Things—both individual toys and parts of toys—become more mobile, flow into each other, polymorphous and promiscuous. If he had been thinking of Barbie and the other toys individually as “vehicles of fantasy,” piled all together this way they looked more nearly awash in fantasy. There are a lot of ways to put this general sense: one way would be to say that all these things seemed to emerge from, to be buoyed up on or supported by, something much more mobile, malleable, and inchoate. This last way of putting it—in terms of support—is interesting because it is implicitly sculptural and can give rise to an imagination of the toys as figures more or less momentarily emergent on a difficult, formless and mutable “pedestal.” This seems to me the sculptural thought worked through all across Unbridled, and that thought pretty much immediately attracts other objects that seem bound up with those already collected—most particularly cupcakes with their sweet, swirled frosted tops (see It’s A Girl!, for their particular moment of triumph) and, inevitably, wedding cakes with their tiered bases rimmed with piped fondant and topped with doll-like figures.

So a preliminary inventory of materials discovered as sculpturally available: Barbie, My Little Pony, the Magnolia Bakery cupcake, the wedding cake, and the formless stuff whose energies and plasticity provide their shared support and inner substance. Unbridled taken as a whole is a way of working through—thinking through or within—that field, that stuff. The sculpture for which these materials are available is made up of figure and pedestal; its implicit questions are about what it is to support or be supported, what it might be to be self-supporting, for something stand on its own ground: questions of sculpture, questions of fantasy—but also questions of toddlers, and the adults they may become, the fantasies they will be propped up on.

In working through such material some things become clearer. Although in my story, it all starts with Barbie, she comes to look increasingly special—further from the fluid underlying fantasies and more nearly a rigid ideal crystallized out of it; My Little Pony, by contrast, sticks closer to core stuff of fluid repetition and transformation. Barbie is essentially an isolated object; My Little Pony is deeply multiple, in its images, its colors, its approaches to and passages through gender, and in its incarnations as cartoon and object. Barbie is articulated where My Little Pony is animated, and so on. (This last contrast, between animation and articulation is one I take to be particularly interesting because it seems to me deeply at work in contemporary culture much more broadly.)

The resulting works are things not to be interpreted—nothing stands for anything, there are no “meanings” of that kind to be made out—but to be read, followed out: the inchoate blob is repeatedly caught just as the edge of the body—becomes variously excremental, intestine, ingestive, or orificed; in other places it move to consolidate itself, to crystallize or constrain itself, as figure—so that here (in, say, Warpaint or Getaway Sticks or Pearls of Wisdom) it gathers itself into beads, and there what emerges on the ground of unbridled fantasy becomes, as in Glorious Steinem, its rider, and then the rider herself is saddled, and over there she has become more simply (wedding) bridal. . . . This last connection may seem merely “verbal”—but that would be to forget how deeply cultural Ramsay’s materials are; Barbie is not cadmium red or clay or marble; it is a material already shot through with language, brings that into play.

The monumental Unicorn Milk (despite its modest table size, this seems the right word for its fully sculptural intent) is the show’s closest approach to a work in which the relations between sculpture and pedestal, fantasy and idealization, appear fully measured and locked in place—as if this fully muscled unicorn, teated like the Capitoline she-wolf, were the adequate expression of the fantasies now fully subsumed within it.

What’s not clear is how much credence the show—or the visitor—should place in that apparent resolution; it sits, after all, side by side with its uncanny near-double in crumbling cake that that gives the show its title and is perhaps also the un-bridaled ruin of the wedding cake whose topper sits on the sill across the room. These three sculptures that punctuate the show are not exempt from the play of repetition and transformation at work across the show as a whole; they stand within in it and offer no commanding view of it.

If I’ve stressed the sculptural idea at the heart of Unbridled, it is nonetheless a very notable feature of the majority of the works that they are not, in the usual sense, sculptures. Instead, they hang on the wall, as if themselves groundless, unable to hold themselves in any place that can claim as their own and so obliged to depend from painterly surfaces—as if such fantastic sculpture could find its only ground in the screen that is at once a place of projection and an impenetrable veil falling between even the most inchoate fantasy and its deepest, inexpressible and endlessly expressive source.