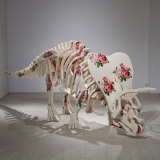 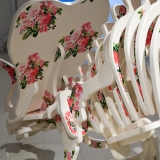 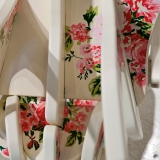 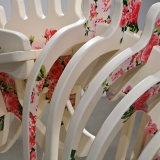 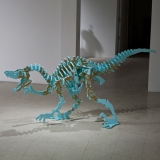 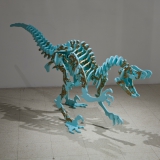 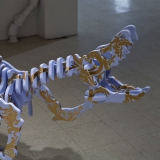 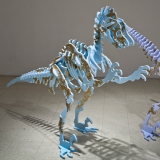 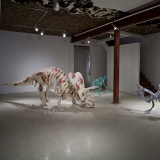 In the era of austerity, where unprecedented cuts to education, social-services and arts funding seem to know no end, it is nice to know that the well-to-do of the world can still shell out €1,296,750 for the purchase of one of our planet’s extinct inhabitants: the dinosaur. Breaking records in the European market, fall 2010 marked the sale of the remains of a female allosaurus to an unnamed buyer. Clearly, in our time where the disparity between rich and poor, have and have not, reaches unprecedented levels, what really compliments the 21st century home are the bones of a carnivorous lizard.

There is a playfulness to these Jersey Girls, they attract attention. Well-manicured and ornately detailed, they seem poised to attack or defend. A certain pop sensibility appears to inform the work, where kitsch and the child’s model interact to become something both mischievous and monstrous in the same moment. In part, the dinosaur acts as the flip-side of enculturation; children encounter history and evolution through what came prior. The natural history museum frames our collective imagination of the past, engrossing us with tales of giant lizards and a time wholly unlike our own yet completely similar. The past can be dressed up, remodelled, repositioned, to enact our fantasies and empirical judgements.

Recent Art History stipulates that Andy Warhol got his cue for the superstar tag from one Ingrid Superstar, a Jersey Girl. As well, Brian Jungen elevated the whale skeleton to high-art status through the appropriation of plastic deck chairs. I would argue Ramsay offers both a convergence and expansion of Warhol’s obsession with stereotype and celebrity and Jungen’s interest in the unlocked potential of the free and radically mundane. To discern status based on geographical locale, or the sign-fetish, allots a contingent moment for activism where art can intervene, comment, encapsulating the gestures of the current.

A good piece of art will always render its surroundings visible, provoking us to break out of our prescribed habitats and comfort zones. Stopping short of a slap across the face, the threat of being consumed by an oversized reproduction of many a child’s fantasy teases out the aggression intrinsic to our fascination. Why the attraction with oversized cold-blooded killers at a time when the war-economy appears infinite? Either way, I will be over by the triceratops, she carries herself in the right kind of way and that sartorial sophistication borders the angelic.