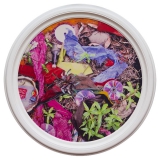 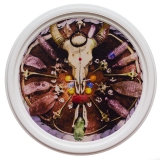 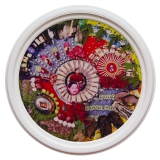 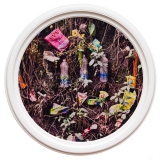 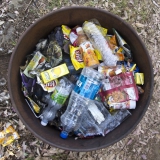 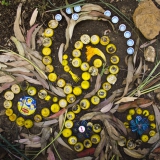 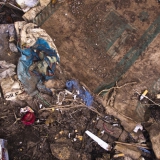 Project Description
Bevan Ramsay's latest work, neatly encased in square, thin and minimalist white attire, bursts open to reveal soft, sensuous curves, bombastic colors, and a quite loving embrace for the chaos of this world. In Harmonia Hindi, his most recent exhibition in Norfolk, CT, Ramsay takes one of the strangest and most superfluous representatives of our culture—the silk scarf—and repurposes it to reveal the ways in which the common, the everyday and, indeed, the thrown away, can be reclaimed and, perhaps for the first time, become part of something beautiful. CDs, old photos, liquor bottles, and other refuse rub elbows with items boasting more auspicious origins and all, it seems, serve equal measure in Ramsay's painstaking arrangement of their parts to bring wholly new, brightly illustrated, and inexplicably moving compositions to the silk scarf via digital print architecture. Though Ramsay sets the subject matter of Harmonia Hindi against the backdrop of his year in India, nothing he has done thus far more clearly reflects his Montreal roots. Indeed, if Harmonia Hindi had a theme song, it would be a South Asian remix of Leonard Cohen's "Suzanne". Like Suzanne, Ramsay shows you where to look among the garbage and the flowers. Like Cohen, he resolutely refuses to be a passive observer. There is no Emersonian all-seeing Eye to be found here, no patient wildlife photographer hiding motionless in a bluff, embarrassed to be human. Ramsay is a part of this world and he knows it. As such, he interacts with his environment fearlessly, even recklessly. In the works that comprise Harmonia Hindi, Ramsay doesn't just gaze at the refuse of a new consumer culture, he actually plays with the garbage and elements of the natural environment, arranging them into intricate patterns and gorgeous designs reminiscent of the sand mandalas carefully constructed (and then destroyed) by Tibetan Buddhist monks. The philosopher Slavoj Žižek has recently implored us all to "Love trash, love decay – because it's real and it's the only thing that's going to inspire people to be aware of the planet's true ecological state. Pictures of beautiful healthy wildlife in natural settings only serve to reassure us that everything is OK." We couldn't help but think of these words as we looked at some of the later pieces in Harmonia Hindi. Ramsay has clearly followed Žižek's advice. He loves trash and decay—and, because he's an artist, he knows how to make us love them too.